Today is "mid-Lent Sunday". We have reached the halfway point on the journey to our paschal celebration. However, our Lenten story, our journey has a spoiler. A "spoiler" is a popular term used when someone spoils suspense by telling you the end of the story or movie when you are in the midst of reading or watching.

Today we read from the beginning of Jesus' ministry but we already know the end of the story of Jesus' life.

The Gospels themselves were created from the end and working backwards to the beginning. As Paul says, "If Christ has not been raised then we are the most foolish of people". The earliest Gospel was the work of people who witnessed the fact that Christ has died, Christ had risen, Christ will come again.


If not, the disciples would have dispersed in defeat and despair after the events of Good Friday. Because they experienced the victory of the Resurrection they went forth to preach the Good News. And as they did they began to include stories and sayings of Jesus, his healings and parables; finally going back to the beginning. So the Gospels, were, in a sense, written backward. Also, they were written by people who already believed; written to support, nurture and encourage the faith in the hearts of disciples.

We were not present in that upper room; we did not see or touch or hear the Risen Christ.

Jesus, himself acknowledges this. At the end of today's Gospel, when Jesus appears to the disciples and confronts Thomas who had been absent the week before when Jesus first appeared. Jesus says to Thomas "blessed are those who do not see but yet believe". He is talking about us. But even though we were not present, we were, in some way touched by the loving presence of God. Some people can tell you the time and date they came to believe.

I call them the Paul-like people. On that road to Damascus, Paul was thrown to the ground, blinded and spoken to. Easy to get the message. But that's not me. For me it's been more a life long schlep - growing and trusting, doubting and confusion, but going on, finding nourishment and meaning and faith. I call this the Peter-like journey. Peter heard a call, responded, proclaimed the truth, but made mistakes, even denied, but always returned to follow the Lord.

"Christianity stands or falls with its revolutionary protest against violence"

In the end, Peter and Paul wound up in the same place. Coming to the end, faithful to their God. So, here, on this mid-Lenten Sunday, we are gathered to proclaim Christ has died, Christ has risen, Christ will come again. But this Sunday has many other names. Laetare Sunday- Which in Latin means "rejoice". In the tradition of the Church, the entrance hymn assigned for this day when worship was in Latin began, "rejoice O Jerusalem". So, you're halfway through, Rejoice. Refreshment Sunday was given because the Gospel for today was the multiplication of the loaves and fish.

We are old enough to remember when the same readings from scripture were heard each Sunday, every year. No longer. But in the old days, the Gospel for the 4th Sunday of Lent was always the multiplication of the loaves and fish, when Jesus refreshed the crowds. So be refreshed. Rose Sunday - was a name given in the Middle Ages marking the custom of the Pope giving roses to the political leaders of the day.

Soon, Rose colored Vestments were used this day at Eucharist.

The Jesus Model of Discipleship - The Four Fields

Mothering Sunday - In England, servants were allowed to return to their home and with family attend their "Mother Church". In the last century this evolved into Mother's Day in England. But our Gospel seems to suggest we might call this snake Sunday. Jesus compares himself to the snake lifted on a pole by Moses to heal those suffering from the venom of snakebite.

Jesus uses this well known image as a sign for his death, his being lifted up on the cross for the healing of the world, the revelation of a love without limit and without end, the restoration of a trusting relation with God. As I said, the Passion Story, the end of the Gospel, the Passion, death and Resurrection were the first part of the Gospel preached and written down. In John's Gospel the Passion and the whole Gospel have a different tone than the other three.

So, he has already told us the end. And all through this Gospel it is fairly clear who Jesus is.

Perhaps that is another name for this Sunday - Encouragement Sunday. Years ago, I used to have a bus driver license.

They were people who served the poorest of the elderly poor of the inner city of Chicago. I would drive to a large housing project and members would bring out elderly folk and we would go to a restaurant for a feast. On the way back one woman, in her 90's would ask to be dropped a few blocks before the housing project- at her little store front church. Reverend, she would say, "If I can get there for one hour on Sunday, I can make it through another week. On this Sunday may we be encouraged to find in the true bread the presence that gives life to the world.

May we sense the presence in ourselves, encouraging us, giving us hope, supporting our belief that God so loved the world, that God sent the son that we have life in abundance, and find everlasting healing through him. 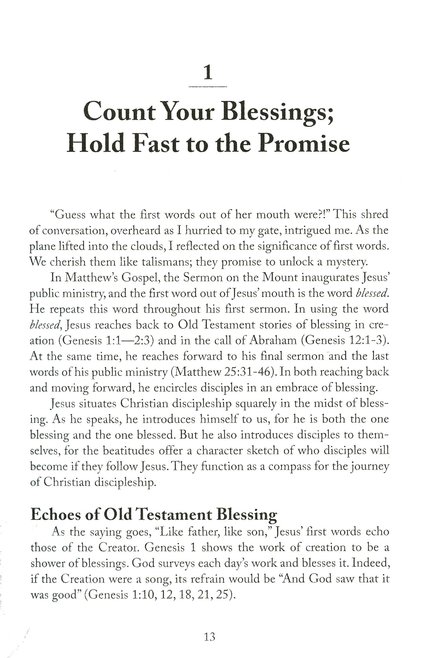 January 28, As you know, we will be reading from the Gospel according to Mark most Sundays this coming year. I say most because Mark, the first written Gospel account is also the shortest - about half the length of Luke. So it will be necessary to supplement readings from John some Sundays. While it is the earliest, Mark's Gospel was not written in the form we have until around the year 70 AD, which is 35 years after the death and resurrection of Jesus.

The earliest Christians preserved and retold Jesus' words and deeds, and among his words was the promise that he would return and gather them to the Father.


However, as time passed and the eyewitnesses began to die and memories began to conflict, it seemed important to have a written record. Also, things had gotten very difficult for the Christian community. Many think Mark's Gospel was written for the community in Rome. They were in crisis. Peter and Paul had been martyred by the emperor Nero. Many others had been murdered and all were subject to persecution.

Where is Jesus, many asked. Where is the power of his victory over death, where the gift of unending life? Mark's Gospel addresses these concerns, reminding the disciples that the victory of Jesus came only after betrayal, arrest, passion and death - after suffering. Mark's Gospel teaches that Jesus does not come to save us from suffering, but rather to join us in the midst of suffering. Jesus stands with us, supports and empowers us so that we too will share in Christ's victory.

Present, but not fully visible. This reminds me of the rabbi who announced to his congregation one Sabbath that Messiah had come. Members were shocked: "Rabbi: they said, "Messiah will bring peace and justice and compassion, end war and discord. Working out the details is one way to express what we are doing at All Saints'. As we saw last week, the first thing Jesus did was gather disciples, call people into community - gather, as one mentor says, a circle of disciples.

They were not an impressive lot. Fishermen, tax collector. And as we read through this Gospel, we will see that more often than not they don't understand the meaning of what Jesus says and does. It takes a while for them to become what Luke defines as a disciple - one who hears the word of God and does it.